And hello to anyone who might be reading this, even though I know the chances are thin.

Any way, I'm back, I hope. I haven't had alot of time to post or really do anything in the hobby aside from reading some books, on account of exams(that are finally over for the moment), and circus. I've only picked the hobby back up in the past couple of days, modeling some wolf guard and under coating some wolves. I'll try get some pictures up soon, as well as a couple lists I'm working on for the (still) upcoming tourniment.

That's all for now. I will try to be more active, and if I do get any readers, please drop a comment, I'd like to know. And let me know what kinds of things you like to see or read so I don't just post rubbish no one wants to look at anyway.


Deployment:
I won the roll off and elected first turn. I set my Missile Launcher Long Fangs (MLLF) in the rock pile for cover and the Initiative boost if I was charged. The Heavy Bolter Long Fangs (HBLF) went on the left hill. The Grey Hunters in the Rhino deployed in the middle of the board beside the MLLF and the other squad went on the other side of the Rhino with the Rune Priest on the 12” line.

The ‘nids deployed on the line, Hive Tyrant to my left, then the Trygon Prime and the Zoanthropes with the Genestealers outflanking.

Turn 1
The ‘nids attempt to steal the initiative but the Wolves are ready and they fail.

Wolves;
The Rhino moves up 6” to get in range and hopefully absorb some fire and the GHs move 6” to get LOS on the Tyrant. The Rune Priest then calls the power of the World Wolf and the planet swallows the Tyrant (This was a huge pressure relief). The MLLF fire at the Trygon but all their shots fall wide, the HBLF open up on the Zoanthropes, killing one.

Nids;
The Zoanthropes and Prime move up 6” to get range. The Zoanthropes Warp Blast away the HBLF and a Bio-Electric pulse from the prime claims 2 Grey Hunters.

Turn 2
Wolves;
The rhino rushes to the right of the MLLF to block LOS if the Zoanthropes come round that way. The Rune Priest unit moves back a little to stay away from the Trygon and the Priest attempts to Jaws the Trygon with no success. The MLLF fire at the Prime, hitting once and wounding.

The Trygon moves forward and Pulses the Grey Hunters again, felling another. The Zoanthropes move back around the rocks and Warp Blast the Long Fangs, felling one thanks to scatter and cover.

Turn 3;
The Rhino turns around and the Grey Hunters pile out, running up towards the Zoanthropes, with their shooting having no effect and then charge in. The Rune Priest leaves the hunters, who moved into the Trygons face. The Priest used Jaws of the World Cheese, hitting the Prime and a Zoanthrope, with no effect. The MLLF fired at the Trygon, as did the hunters, putting 3 wounds on it, the hunters then charge in. In assault, the Zoanthropes are wiped out without taking any hunters. The other squad failed to wound the Trygon, losing 6 of their number, running, getting caught and dieing to fearless wounds. The Grey hunters and Trygon consolidate towards each other.


Nids;
Both squads of Stealers arrive, one each side. One squad moves and charges the Rune Priest, the other squad do the same to the Long Fangs. The first squad of Stealers only do a single wound to the Rune Priest, who kills two in return, causing the squad to run. The other squad fared no better, the Long Fangs attacked first, thanks to the cover, killing 2 Stealers, who only killed a single LF, but the Stealers stayed.

Turn 4
Wolves;
The Rune Priest moved towards the Long Fang combat and the Grey Hunters charged straight into the Trygon, doing a single wound with shooting, then killing it in combat, losing 6 of their own, they consolidated towards the fleeing stealers. The Long Fangs took no wounds and killed another Stealer.

Nids;
The Stealers continue to run. In combat the other squad kill a single Long Fang, and lose a single member.

Turn 5
Wolves;
The Rune Priest moves to the Rhino and gets in, the Grey Hunters move to try and get range on the Stealers but cant. In CC, no wounds are caused.

Nids;
The Stealers regroup, and charge the Grey Hunters, killing them outright. In the other combat, Refer to ‘Turn 5’

We roll, and Continue Turn 6

Turn 6
Wolves;
The rhino moves up and the Rune Priest calls a Murderous Hurricane on the Stealers, killing them. In CC, the Stealer dies.


So a Space Wolves Victory. 5 Kill Points to 3 and a wipe out. All said and done, Tom rolled fairly badly, but then again, so did I. Guess we’ll have to have another game....
Posted by AppleJack at 6:21 PM 1 comment:

And like the noble phoenix, 40K Radio has returned from the ashes, albeit with a new set of feathers.

Most of you have probably already heard, but for those who haven't, Romeo from Battle Foam has bought 40KR off Spencer after a very dark time. Its now headed by George Milller and Cpn. Rikatus.

So head on over to www.40kradio.com and check out the intro show. i would suspect the 1st episode to be out on the 29th.

Have been working on my 750 Southern Slaughter list. Its been Refined...

I played this Against Jacob, from Exemplar Mundane (http://exemplarmundane.blogspot.com/) and pulled out a win after 1 grey hunter squad dealt with a dread and then neutered his Ven Dread, leaving it to the long fangs.

Also, im using an alternate fig for my preist, a female and as such am using a squad of sisters to represent Hunters, so the whole squad is Female. Am i pushing things??

Anyway, Thanks for showing and for any C&C
Posted by AppleJack at 1:05 AM No comments:

That leaves 20pts, if i added right. any ideas, C&C would be great.
Posted by AppleJack at 3:55 AM No comments:

A macro-splinter of the minor hive fleet Repalis hit the ice world of Fenris. In the splinter is a lone Trygon Prime. Within hours of striking the surface, the Prime is located. Seeing it as an opportunity to study and work on a virus to wipe out the Tyranid menace, the Great Wolf decides to capture the beast. Wolf Scouts are dispatched with immense amounts of sedatives. Over the next three days, the Prime is worn down by constant injections and finally captured for study. The following four years reap many great rewards for the Space Wolves chapter, one of these is a device that nullifies the influence of the Hive Mind, many of which are attached the Prime. At the end of the four years, Logan orders the creature destroyed, though an ambitious young Iron Priest request to be allowed to conduct experiments to give him the ability to control the Prime using experimental equipment. Logan accepts the request, giving the Priest 2 years to conduct his work. The young priest spent every day he was given working on the Trygon. By the end, the priest had full control of the beast. Logan was truly impressed with the work of the priest, having conducted what was considered an impossible deed. The Prime was first used in the quelling of a small ork WAAGH! With great success, though when it moved too far from the iron priest, the Trygon retuned to is primal behavior, upon returning to Fenris, the priest spliced Heavy Bolters on its lower arms and Lascannons on its back “for giggles”. In the next battle, the priest attached wiring directly into the brain and connecting back into the body of the Trygon. During the battle, the Trygon is hit by an Ork Zzap cannon, this caused an unexpected fusing of the iron priest and Trygons minds. As a result, the Prime and the priest became as one, neither able to be far from the other. The priest and his Trygon still go into battle and will do so till they are killed, and even then, they will live on in legend.

I know its not that great but i like the idea
Posted by AppleJack at 4:32 AM No comments:

Heres a little something I've been working on. The idea is its been captured and wired up, blocking out the hive mind and giving control to the rider. I still need to ad wiring and some metal plates but I'll get there in the end ;). 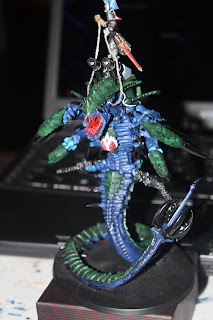 ...And a close up on the Carapace. 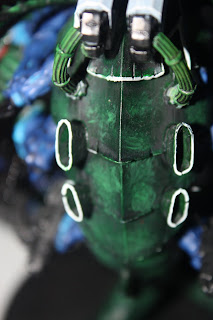